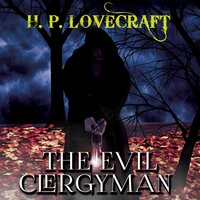 Эту аудиокнигу могут слушать только подписчики Яндекс Плюса Оформите подписку — вы сможете не только послушать эту аудиокнигу, но и скачать ее на телефон.
Если у вас уже есть подписка, авторизуйтесь.
"The Evil Clergyman" is an excerpt from a letter written by American horror fiction writer H. P. Lovecraft in 1933. After his death, it was published in the April 1939 issue of Weird Tales as a short story. The story was later adapted into the unreleased 1987 anthology film Pulse Pounders.
The letter, to his friend Bernard Austin Dwyer, recounted a dream that Lovecraft had had. Although Lovecraft frequently based stories on his dreams, An H. P. Lovecraft Encyclopedia notes that "[i]t is difficult to say how HPL would have developed this conventional supernatural scenario."
The story begins in the attic of an ancient house. The narrator’s companion refers to the former owner of the house and the presumably violent end that befell him. He advises the narrator not to stay after dark or touch anything, especially the small object on a table, which the companion seems to fear considerably.
The narrator is then left alone in the attic; he notes the many theological and classical books, and one bookshelf in particular containing books on magic. He feels a considerable curiosity for the forbidden object on the table. The narrator finds a strange flashlight-like device in his pocket that produces a peculiar violet glow. He attempts to illuminate the object on the table with this strange light, which he describes as being composed of particles. The object makes a crackling sound like a sparking vacuum tube, and takes on a pinkish glow with a vague white shape taking form from its center. The narrator, feeling that his surroundings are taking on strange new properties, realizes that he is not alone; the sinister newcomer is described as wearing clerical garb typical of the Anglican Church. The newcomer begins throwing magical books into a fireplace...
Famous works of the author Howard Phillips Lovecraft: At the Mountains of Madness, The Dreams in the Witch House, The Horror at Red Hook, The Shadow Out of Time, The Shadows over Innsmouth, The Alchemist, Reanimator, Ex Oblivione, Azathoth, The Call of Cthulhu, The Cats of Ulthar, The Dunwich Horror, The Doom that Came to Sarnath, The Festival, The Silver Key, The Other Gods, The Outsider, The Temple, The Picture in the House, The Shunned House, The Terrible Old Man, The Tomb, Dagon, From Beyond, What the Moon Brings.
Чтец:
Peter Coates
Продолжительность:
10 минуты
Лейбл:
Strelbytskyy Multimedia Publishing
H.P. Lovecraft. «The Evil Clergyman». #1
0:07
H.P. Lovecraft. «The Evil Clergyman». #2
9:42
H.P. Lovecraft. «The Evil Clergyman». #3
0:12
Выкл Вкл