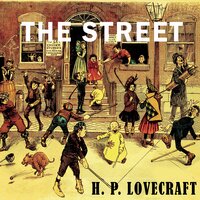 Эту аудиокнигу могут слушать только подписчики Яндекс Плюса Оформите подписку — вы сможете не только послушать эту аудиокнигу, но и скачать ее на телефон.
Если у вас уже есть подписка, авторизуйтесь.
"The Street" is a short story by American horror fiction writer H. P. Lovecraft, written in late 1919 and first published in the December 1920 issue of the Wolverine amateur journal.
The story traces the history of the eponymous street in a New England city, presumably Boston, from its first beginnings as a path in colonial times to a quasi-supernatural occurrence in the years immediately following World War I. As the city grows up around the street, it is planted with many trees and built along with "simple, beautiful houses of brick and wood," each with a rose garden. As the Industrial Revolution runs its course, the area degenerates into a run-down, polluted slum, with all of the street's old houses falling into disrepair.
After World War I and the October Revolution, the area becomes home to a community of Jewish Russian immigrants; among the new residents are the leadership of a "vast band of terrorists" who are plotting the destruction of the United States on Independence Day. When the day arrives, the terrorists gather to do the deed, but before they can get started, all the houses in the street collapse concurrently on top of them, killing them all. An observer at the scene testified that immediately after the collapse, he had seen visions of the trees and the rose gardens that had once been in the street.
Famous works of the author Howard Phillips Lovecraft: At the Mountains of Madness, The Dreams in the Witch House, The Horror at Red Hook, The Shadow Out of Time, The Shadows over Innsmouth, The Alchemist, Reanimator, Ex Oblivione, Azathoth, The Call of Cthulhu, The Cats of Ulthar, The Dunwich Horror, The Doom that Came to Sarnath, The Festival, The Silver Key, The Other Gods, The Outsider, The Temple, The Picture in the House, The Shunned House, The Terrible Old Man, The Tomb, Dagon, From Beyond, What the Moon Brings.
Чтец:
Peter Coates
Продолжительность:
14 минуты
Лейбл:
Strelbytskyy Multimedia Publishing
H.P. Lovecraft. «The Street». #1
0:05
H.P. Lovecraft. «The Street». #2
13:44
H.P. Lovecraft. «The Street». #3
0:12
Выкл Вкл