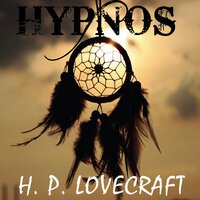 Эту аудиокнигу могут слушать только подписчики Яндекс Плюса Оформите подписку — вы сможете не только послушать эту аудиокнигу, но и скачать ее на телефон.
Если у вас уже есть подписка, авторизуйтесь.
"Hypnos" is a short story by American horror fiction writer H. P. Lovecraft, penned in March 1922 and first published in the May 1923 issue of National Amateur.
"Hypnos" is a first-person narrative, written from the perspective of an unnamed character living in Kent and later London, England. The narrator writes that he fears sleep, and is resolved to write his story down lest it drive him further mad, regardless of what people think after reading it.
The narrator, a sculptor, recounts meeting a mysterious man in a railway station. The moment the man opened his "immense, sunken, and widely luminous eyes", the narrator knew that the stranger would become his friend-–"the only friend of one who had never possessed a friend before." In the eyes of the stranger, he witnessed important knowledge of the mysteries he always sought to learn.
From then on, with the aid of drugs, the two avoid sleep, as each time they succumb, they both seem to rapidly age and are plagued by nightmares that the narrator refuses to explain. The story ends with the narrator explaining that one night, his friend fell into a "deep-breathing sleep" and was impossible to arouse. The narrator shrieks, faints, and awakes surrounded by police and neighbors, who inform him that his friend was not real. There is only a statue of his friend in his room, engraved with the Greek word: ΥΠΝΟΣ (Hypnos).
Famous works of the author Howard Phillips Lovecraft: At the Mountains of Madness, The Dreams in the Witch House, The Horror at Red Hook, The Shadow Out of Time, The Shadows over Innsmouth, The Alchemist, Reanimator, Ex Oblivione, Azathoth, The Call of Cthulhu, The Cats of Ulthar, The Dunwich Horror, The Doom that Came to Sarnath, The Festival, The Silver Key, The Other Gods, The Outsider, The Temple, The Picture in the House, The Shunned House, The Terrible Old Man, The Tomb, Dagon, From Beyond, What the Moon Brings.
Чтец:
Peter Coates
Продолжительность:
18 минуты
Лейбл:
Strelbytskyy Multimedia Publishing
H.P. Lovecraft. «Hypnos». #1
0:06
H.P. Lovecraft. «Hypnos». #2
17:58
H.P. Lovecraft. «Hypnos». #3
0:13
Выкл Вкл