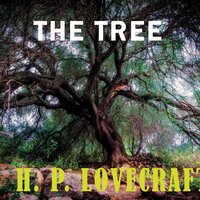 Эта аудиокнига доступна только для подписчиков. Оформите подписку Плюс — вы сможете не только послушать эту аудиокнигу, но и скачать ее. Также вы получите дополнительные возможности в сервисах Яндекса.
Если у вас уже есть подписка, авторизуйтесь.
"The Tree" is a macabre short story by American horror fiction writer H. P. Lovecraft. It was written in 1920, and published in October 1921 in The Tryout. Set in ancient Greece, the story concerns two sculptors who accept a commission with ironic consequences.
Lovecraft wrote "The Tree" early in his career. He was dismissive of the story in a 1936 letter. Such stories, he said, "if typed on good stock make excellent shelf-paper, but little else." The assessment of Lovecraft authority S. T. Joshi was that although the story "may be a trifle obvious… it is an effective display of Lovecraft's skill in handling a historical setting."
On a slope of Mount Maenalus in Arcadia is an olive grove that grows around a marble tomb and the ruin of an old villa. There, one gigantic tree resembles a frighteningly distorted man, and the roots of the tree have shifted the blocks of the tomb.
The narrator explains that the beekeeper who lives next door told him a story about the tree: Two renowned sculptors, Kalos and Musides, lived in the colonnaded villa, which was "resplendent" in its day. Both men created works that were widely known and celebrated. They were devoted friends, but different in disposition: Musides enjoyed the nightlife, while Kalos preferred the quiet of the olive grove. It was there he was said to receive his inspiration.
Famous works of the author Howard Phillips Lovecraft: At the Mountains of Madness, The Dreams in the Witch House, The Horror at Red Hook, The Shadow Out of Time, The Shadows over Innsmouth, The Alchemist, Reanimator, Ex Oblivione, Azathoth, The Call of Cthulhu, The Cats of Ulthar, The Dunwich Horror, The Doom that Came to Sarnath, The Festival, The Silver Key, The Other Gods, The Outsider, The Temple, The Picture in the House, The Shunned House, The Terrible Old Man, The Tomb, Dagon, From Beyond, What the Moon Brings.
Чтец:
Peter Coates
Продолжительность:
10 минуты
H.P. Lovecraft. «The Tree». #1
0:06
H.P. Lovecraft. «The Tree». #2
10:25
H.P. Lovecraft. «The Tree». #3
0:12
Выкл Вкл