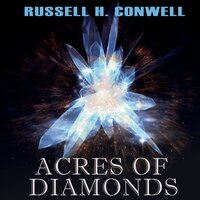 Эта аудиокнига доступна только для подписчиков. Оформите подписку Плюс — вы сможете не только послушать эту аудиокнигу, но и скачать ее. Также вы получите дополнительные возможности в сервисах Яндекса.
Если у вас уже есть подписка, авторизуйтесь.
"Acres of Diamonds" - essay, by writen Russell Herman Conwell (February 15, 1843 – December 6, 1925) was an American Baptist minister, orator, philanthropist, lawyer, and writer.
The original inspiration for "Acres of Diamonds", his most famous essay, occurred in 1869 when Conwell was traveling in the Middle East. The work began as a speech, "at first given," wrote Conwell in 1913, "before a reunion of my old comrades of the Forty-sixth Massachusetts Regiment, which served in the Civil War and in which I was captain." It was delivered as a lecture on the Chautauqua circuit prior to his becoming pastor of the Grace Baptist Church in Philadelphia in 1882 and was first published in book form in 1890 by the John Y. Huber Company of Philadelphia. Before his death in 1925, Conwell would deliver it over 6,152 times around the world.
The central idea of the work is that one need not look elsewhere for opportunity, achievement, or fortune; the resources to achieve all good things are present in one's own community. This theme is developed by an introductory anecdote, credited by Conwell to an Arab guide, about a man who wanted to find diamonds so badly that he sold his property and went off in futile search for them. The new owner of his home discovered that a rich diamond mine was located right there on the property. Conwell elaborates on the theme through examples of success, genius, service, or other virtues involving ordinary Americans contemporary to his audience: "dig in your own backyard!"
Conwell held elitist attitudes by quoting the following from his speech: I say that you ought to get rich, and it is your duty to get rich ... The men who get rich may be the most honest men you find in the community. Let me say here clearly ... ninety-eight out of one hundred of the rich men of America are honest. That is why they are rich. That is why they are trusted with money. That is why they carry on great enterprises and find plenty of people to work with them. It is because they are honest men. ... I sympathize with the poor, but the number of poor who are to be sympathized with is very small. To sympathize with a man whom God has punished for his sins ... is to do wrong. ... Let us remember there is not a poor person in the United States who was not made poor by his own shortcomings...
Conwell's capacity to establish Temple University and his other civic projects largely derived from the income that he earned from this speech. The book has been regarded as a classic of New Thought literature since the 1870s. After Conwell's death, proceeds from this speech were dedicated to the Sunday Breakfast Association, a homeless shelter in Philadelphia.
Other works by Conwell include:
Every Man His Own University
Acres of Diamonds
Increasing Personal Efficiency
The Key to Success
Health Healing and Faith
Praying for Money
Subconscious Religion
Чтец:
Trevor O'Hare
Продолжительность:
1 час 13 минуты
Лейбл:
Strelbytskyy Multimedia Publishing
Russell H. Conwell. «Acres of Diamonds». #1
0:08
Russell H. Conwell. «Acres of Diamonds». #2
1:31
Russell H. Conwell. «Acres of Diamonds». #3
71:42
Russell H. Conwell. «Acres of Diamonds». #4
0:13
Выкл Вкл